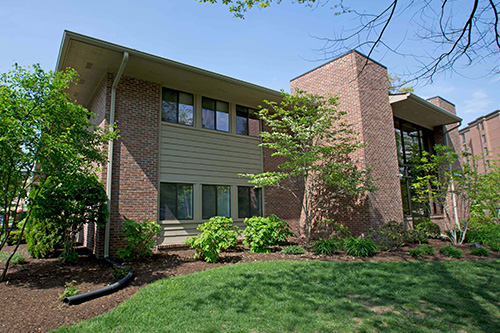 JMS was approached by the developer to acquire this under-performing asset. The property consisted of two, two-story office buildings totaling over 40,000 square feet in West Toledo. The South building was re-built in 2006 and was fully occupied with professional and medical tenants while the North building was older and had over 60% of its space vacant and the other 40% occupied by month-to-month tenants. The vacant space was a mish-mash of office and medical spaces and was anticipated it would require complete renovation in order to secure long-term tenants. Considering the amount of money that would be required to do this, the property was often left off the radar by the brokerage community based on the perception the current owner was not willing or able to perform.

Considering there were limited leasing options in the West Toledo submarket for tenants between 5,000 SF – 10,000 SF, JMS saw an opportunity to “re-brand” the property as a cost-effective alternative for professional medical office space and ultimately acquired the property after a thorough diligence period. JMS conservatively projected it would take 18 months to fully lease the property.

During the first week of ownership, JMS cleaned up the property by installing new landscaping and having the parking lots re-sealed and striped. That same week, JMS developed an aggressive marketing approach targeting all of the logical prospects in the marketplace. Property tours with multiple prospects were coordinated and within thirty days, JMS executed an agreement in principle to lease the entire North building; raising occupancy to 95% and doubling the value of the asset.